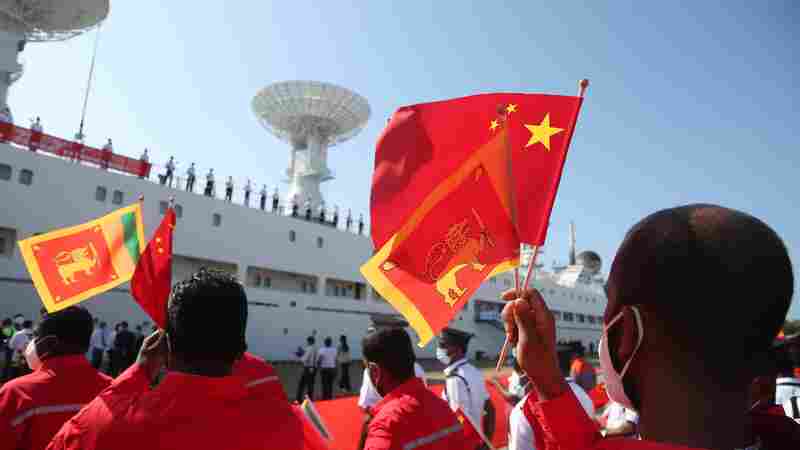 August 19, 2022 • A Chinese survey ship docked this week at the Hambantota port, built with Chinese loans. Some worry the ship's arrival may signal the start of militarization of Chinese infrastructure in Sri Lanka. 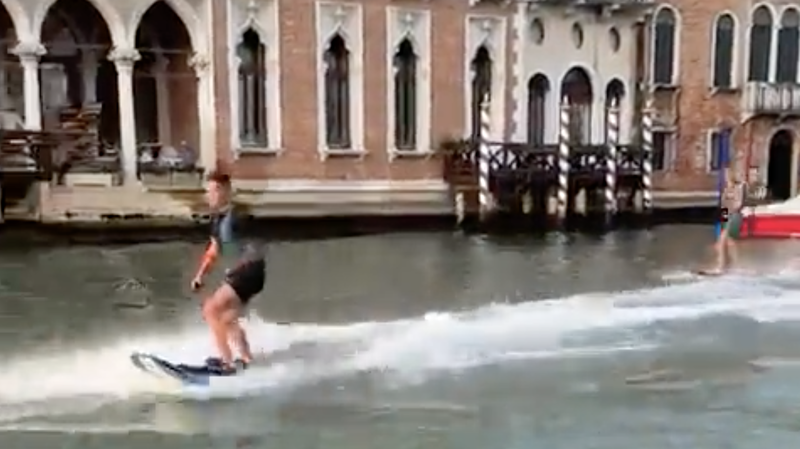 August 19, 2022 • Incensed by two people he saw as making a mockery of Venice, Mayor Luigi Brugnaro offered a free dinner to anyone who could help bring them to justice. 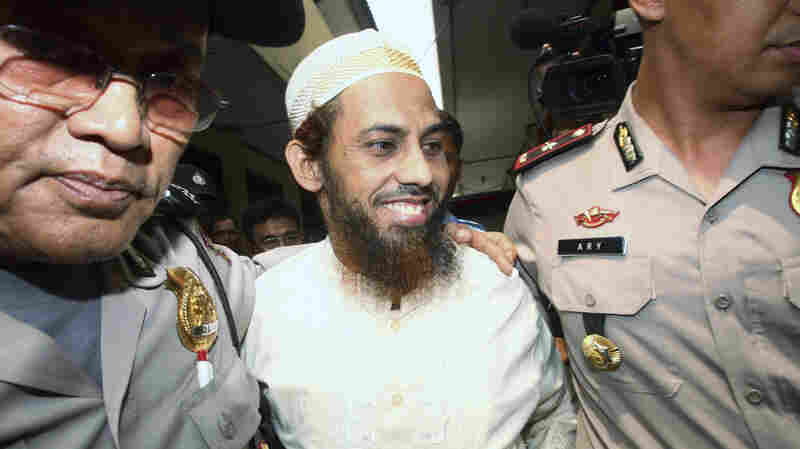 August 19, 2022 • The sentence reduction means Umar Patek could be released on parole ahead of the 20th anniversary of the bombings in October. 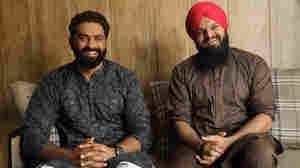 Friends Nasir Dhillon (left) and Papinder Singh run a YouTube channel, Punjabi Lehar, that tries to heal the wounds of Partition through reuniting loved ones separated when British-ruled India was divided into two countries, India and Pakistan, 75 years ago. Diaa Hadid hide caption

Trying To Heal The Wounds Of Partition, 75 Years Later

Trying To Heal The Wounds Of Partition, 75 Years Later

'The Territory' and 'Three Minutes: A Lengthening' find cinematic hope in tragedy

August 18, 2022 • Two documentaries — one involving a pre-WWII home movie, the other dispatches from the Amazon rainforest — have much in common.

'The Territory' and 'Three Minutes: A Lengthening' find cinematic hope in tragedy 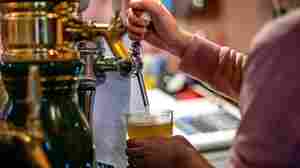 The COVID-19 pandemic has hit Japan's alcohol industry hard, sharpening a long-running trend away from drinking. A new campaign sponsored by the National Tax Agency hopes to change that — but it's running into sharp criticism. Philip Fong/AFP via Getty Images hide caption

August 18, 2022 • Governments are watching lucrative alcohol tax revenues dry up, as people drink less. In Japan, a plan to counter that trend is running into controversy. 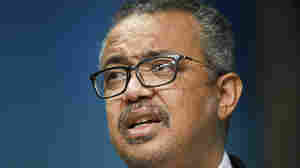 The head of the World Health Organization, Tedros Adhanom Ghebreyesus, speaks in Brussels on Feb. 18. Ethiopia's government is criticizing Tedros' statement that the crisis in the country's Tigray region is "the worst disaster on Earth" and his assertion that the lack of attention from global leaders may be due to Tigrayans' skin color. Johanna Geron/AP hide caption

August 18, 2022 • Ethiopia's government is criticizing as "unethical" the statement by the World Health Organization's director-general that the crisis in the country's Tigray region is "the worst disaster on Earth." 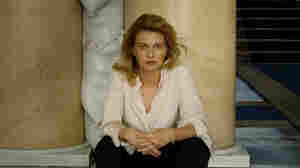 Ukrainian first lady Olena Zelenska on the front cover of Vogue, photographed by Annie Leibovitz. Entitled "Portrait of Bravery," the spread and accompanying interview paint Zelenska as a woman stepping up to the challenge of her many roles in this war. Screenshot by NPR/Annie Leibovitz/Vogue hide caption

August 18, 2022 • Ukrainian first lady Olena Zelenska was criticized for her pose on the cover of the famous fashion magazine. People are coming to her defense to challenge stereotypes about women. 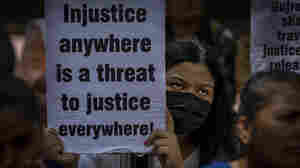 An activist holds a placard during a protest against remission of sentence by the government to convicts of a gang rape, in New Delhi, India, Thursday, Aug. 18, 2022. Altaf Qadri/AP hide caption

August 18, 2022 • Dozens of women protested against the release of the men in the capital, New Delhi on Thursday. 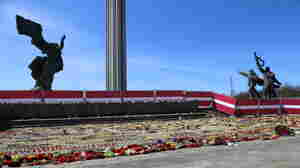 A sea of flowers lies at the fenced-off Soviet Victory Monument in Riga, Latvia, on Victory Day, May 9. The site fully named The Monument to the Liberators of Soviet Latvia and Riga from the German Fascist Invaders is a 260-foot concrete spire topped with a star that was built in 1985, in the waning years of Soviet rule in Latvia. Alexander Welscher/DPA/Picture Alliance via Getty Images hide caption

August 18, 2022 • As Russia's war in Ukraine rages on, former Soviet republics like Latvia plan to destroy Soviet-era monuments. Some believe they should remain as tributes to the fight against Nazis in World War II. 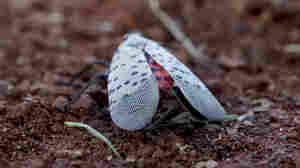 A spotted lanternfly creeps on the ground during a baseball game in Pittsburgh in 2021. Keith Srakocic/AP hide caption

What a pest! Spotted lanternflies are spreading in the U.S.

August 18, 2022 • State officials are calling on residents to get involved and kill these bugs at all costs. The spotted lanternfly isn't dangerous to humans or pets but could cost the country's agricultural industry. 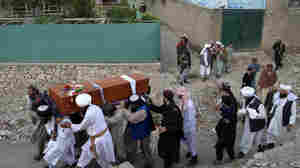 Mourners carry the body of a victim of a mosque bombing in Kabul, Afghanistan, Thursday, Aug. 18. 2022. Ebrahim Noroozi/AP hide caption

August 18, 2022 • There was no immediate claim of responsibility for the Wednesday attack that also wounded children, the latest to strike the country in the year since the Taliban seized power. 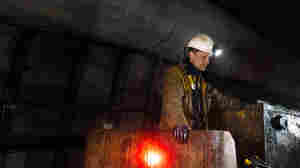 An operator of the mine railway that carries people in and out of the depths of the mine waits as workers disembark. Claire Harbage/NPR hide caption

A Rising Demand for Coal Amidst War in Ukraine

August 18, 2022 • Demand for coal in Europe is rising as Russia's invasion of Ukraine threatens the country's vast natural resource and fossil fuel reserves - and subsequently, the world's energy supply.

A Rising Demand for Coal Amidst War in Ukraine 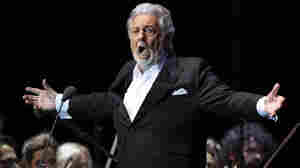 August 17, 2022 • Media in Argentina have broadcast audio recordings of police wiretaps that prosecutors say includes the voice of the famed singer making plans for a sexual encounter arranged by the crime ring. 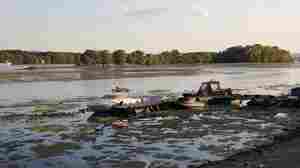 Germany's Rhine is at one of its lowest levels. That's trouble for the top EU economy

August 17, 2022 • A hot, dry summer has meant the water level on the Rhine River, Western Europe's most important waterway, is at a record low, making it too shallow for many ships to pass.

Germany's Rhine is at one of its lowest levels. That's trouble for the top EU economy 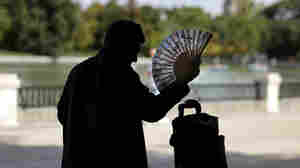 A man uses a hand fan in a park in central Madrid during a heat wave. Thomas Coex/AFP via Getty Images hide caption

It's been a hot summer. Here's how people around the world have been staying cool

August 17, 2022 • Extreme heat is increasingly common throughout the globe, and this summer hit us with a newfound vengeance. From Spain to India, Rough Translation looked at ways people try to beat the heat. 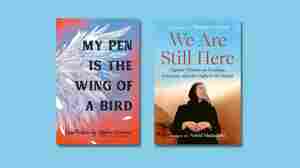 August 17, 2022 • This week marks a year since the Taliban regained control of Afghanistan. But the Taliban hasn't succeeded in silencing Afghan women, whose voices ring out in two new and powerful collections. 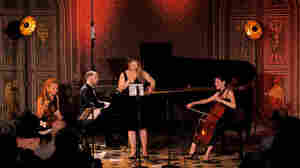 August 17, 2022 • The new record label La Boîte à Pépites is dedicated to raising the profile of female composers whose works have been neglected. 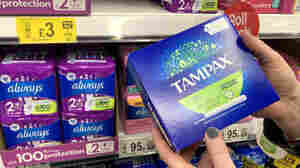 August 16, 2022 • Studies have shown that a significant number of people struggle to afford menstrual products, and going without can cause people to miss school or work. 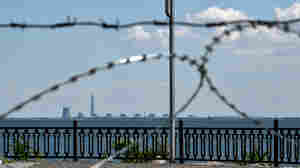 The Zaporizhzhia nuclear power plant in Ukraine's Enerhodar, Zaporizhzhia region, is seen through barbed wire on the embankment in Nikopol, Dnipropetrovsk region, central Ukraine, on July 20. Russian soldiers have been shelling Nikopol from the premises of the nuclear power plant. Dmytro Smolyenko/Future Publishing via Getty Images hide caption

Over the river from a Russian-occupied nuclear plant, a Ukrainian town fears a spill

August 16, 2022 • The small town of Nikopol, Ukraine, sits across the river from the Zaporizhzhia nuclear power plant. Attacks are causing serious alarm for the community.

Over the river from a Russian-occupied nuclear plant, a Ukrainian town fears a spill