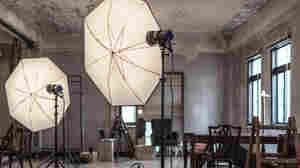 On Sunday, a new law takes effect in France that says a commercial image depicting a model with a digitally altered body must be accompanied by a notice. Instants/Getty Images hide caption

France Aims To Get Real: Retouched Photos Of Models Now Require A Label

September 30, 2017 • The goal is "to avoid the promotion of inaccessible beauty ideals and prevent anorexia among young people," said France's former health minister. 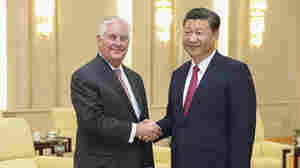 Secretary of State Rex Tillerson shakes hands with China's President Xi Jinping in Beijing on Saturday. Tillerson acknowledged the U.S. has direct contact with North Korea over its nuclear program. China is seen as crucial in helping to avert a military confrontation. Lintao Zhang/AP hide caption

U.S. In Direct Contact With North Korea: 'We Do Talk To Them,' Tillerson Says

September 30, 2017 • "We have lines of communications to Pyongyang," Secretary of State Rex Tillerson said. The State Department later said North Korean officials are not "ready for talks regarding denuclearization."

September 30, 2017 • Independence fever may be raging in Catalonia, but some residents will be sitting out Sunday's referendum. Javier Castellanos talks with Scott Simon about why he prefers the idea of a unified Spain.

The Impact of War

An Update On Trump's Afghanistan Strategy

September 30, 2017 • It's been a little more than a month since President Trump announced a new strategy that involves sending more U.S. troops as advisers to the Afghan military.

An Update On Trump's Afghanistan Strategy

In Russia, 'The Future Is History'

September 30, 2017 • Russian-American journalist Masha Gessen talks with Scott Simon about how Russia went from communism back to authoritarianism without a stop at democracy in her new book, The Future Is History.

In Russia, 'The Future Is History' 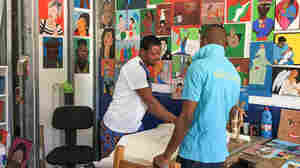 Benjamin Raphael of Nigeria (left) is a salesman who had never picked up a paint brush before he found asylum in Italy. Sylvia Poggioli/NPR hide caption

September 30, 2017 • Amid an influx of African migrants to Italy, a project called 'Make Art Not Walls' is helping them assimilate — and get in touch with their inner artist.

September 29, 2017 • The State Department is pulling more than half its staff from the U.S. embassy in Havana, following mysterious ailments that might be caused intentionally. It also warned Americans not to go to Cuba.

September 29, 2017 • The Spanish government has stepped up efforts to prevent the Catalan independence referendum, with police seizing millions of ballots, and trying to seal-off schools where Sunday's voting is planned. 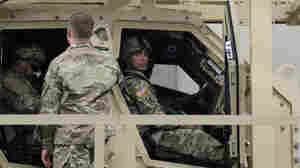 Soldiers practice roll-over drills ahead of their deployment to Afghanistan at Joint Base Elmendorf-Richardson. Zachariah Hughes/Alaska Public Media hide caption

September 29, 2017 • Thousands of soldiers are preparing for yet another Afghanistan deployment. They are the tiny segment of American society in military service. On the eve of their departure, they share their thoughts. 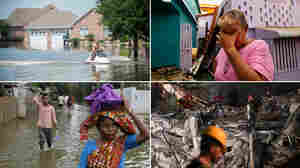 What The Pileup Of U.S. Disasters Means For The World

September 29, 2017 • Fundraising shortfalls. Staff operating at full tilt. How this epic season of hurricanes in the U.S. is complicating the response to global crises.

What The Pileup Of U.S. Disasters Means For The World 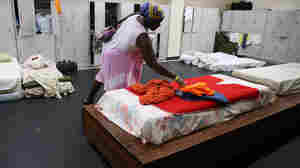 Residents of Barbuda were forced to flee when Hurricane Irma devastated their island on its way through the Caribbean. Here, Jackeline Deazle, whose house lost its roof and windows, is seen at a shelter in the Sir Vivian Richards Stadium last week in North Sound, on Antigua. Jose Jimenez/Getty Images hide caption

September 29, 2017 • Barbuda was the first place Hurricane Irma made landfall as the Category 5 storm devastated a string of islands along the Caribbean earlier this month.

September 29, 2017 • The State Department will pull out all nonessential staff, citing mysterious attacks on diplomats that have caused symptoms including dizziness and hearing problems. The U.S. Embassy will remain open. 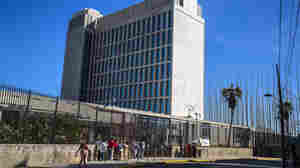 September 29, 2017 • The move follows reports in August that U.S. diplomats in Havana had been subjected to mysterious "sonic" attacks that led to hearing loss, headaches and other health problems. 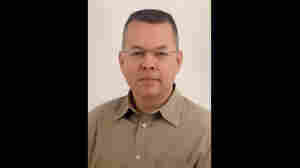 Andrew Brunson, from North Carolina, is in a Turkish prison on terrorism charges that his family calls "totally false." Courtesy of American Center for Law and Justice hide caption

toggle caption
Courtesy of American Center for Law and Justice

September 29, 2017 • "You have a pastor too," President Recep Tayyip Erdogan said, adding, "You give us that one and we'll work with our judiciary and give back yours." 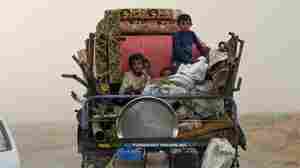 Displaced Syrians head to refugee camps on the outskirts of Raqqa on Sunday. Syrian fighters, backed by the U.S., have been driving out the Islamic State. However, many civilians are fleeing the fighting, and there's still no sign of a political settlement in Syria on the horizon. Bulent Kilic /AFP/Getty Images hide caption

The U.S. Is Beating Back ISIS, So What Comes Next?

September 29, 2017 • The U.S. military and its allies have largely defeated the Islamic State in both Iraq and Syria. Now comes the tricky part: finding political solutions in both of those troubled countries.

The U.S. Is Beating Back ISIS, So What Comes Next?