April 30, 2019 • Secretary of State Mike Pompeo told CNN on Tuesday Venezuela's President Nicolás Maduro was on the tarmac ready to leave, but Russians insisted he stay.

Has The Situation In Venezuela Reached A Turning Point?

April 30, 2019 • NPR's Audie Cornish talks with Rebecca Bill Chavez, former deputy assistant secretary of defense for Western Hemisphere affairs, about the Venezuela military and the politician's gamble to turn them.

Has The Situation In Venezuela Reached A Turning Point?

April 30, 2019 • NPR's Ailsa Chang talks with freelance journalist Mariana Zuñiga, who has been reporting on the Venezuelan protests in Caracas, about the scene on the ground. 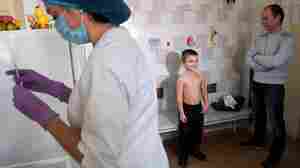 A nurse prepares a syringe for a measles vaccination at a pediatric clinic in Kiev, Ukraine. The country had 72,408 measles cases in the year from March 2018 to February 2019 — the highest number for any country during that period. Sergei Supinsky/AFP/Getty Images hide caption

U.S. Measles Outbreaks Are Driven By A Global Surge In The Virus

U.S. Measles Outbreaks Are Driven By A Global Surge In The Virus 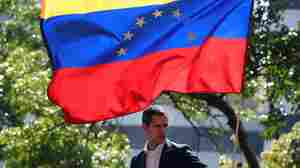 Venezuelan opposition leader and self-proclaimed acting president Juan Guaido stands under the national flag during a gathering with supporters after members of the Bolivarian National Guard joined his campaign to oust President Nicolas Maduro, in Caracas on April 30. Federico Parra/AFP/Getty Images hide caption 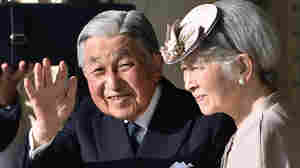 Japan's Emperor Akihito, with Empress Michiko, waves to well-wishers in the central Japanese prefecture of Mie on April 18. Emperor Akihito takes part in a series of rituals ahead of his abdication. Kazuhiro Ngoi/AFP/Getty Images hide caption

April 30, 2019 • Japan's defeat in World War II "produced in him strong feelings against war and its chaos," says a childhood friend. Akihito has expressed deep remorse at home and abroad for Japan's wartime actions. 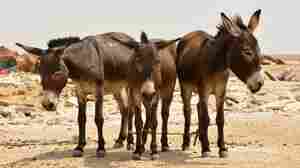 Donkeys in Africa are among those slaughtered so their hides can be sent to China. Ofir Sarfaty/EyeEm/Getty Images hide caption

April 30, 2019 • China reportedly needs 4 million donkey hides a year for the traditional medicine ejiao. They're importing hides from poor countries — and dealing a blow to people whose livelihood depends on donkeys. 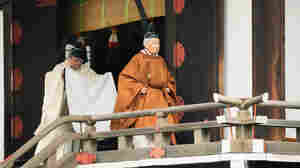 Japan's Emperor Akihito (right) leaves after a ritual to report his abdication to the throne at the Imperial Palace in Tokyo on Tuesday. AP hide caption

April 30, 2019 • The 85-year-old emperor is the first to retire in more than 200 years. His son, the Crown Prince Naruhito, will become emperor on Wednesday.

April 30, 2019 • Akihito, citing failing health, becomes the first Japanese monarch in some two centuries to step down. His reign ends at midnight Tuesday, and then his son, Crown Prince Naruhito, ascends the throne.

April 30, 2019 • A video purports to show the ISIS leader speaking to followers and referencing the Easter Sunday bombings in Sri Lanka. The first video was released in 2014 as ISIS was rapidly increasing in strength.

Negotiators Are In Beijing For Talks On Ending U.S.-China Trade War

April 30, 2019 • Treasury Secretary Steven Mnuchin has been suggesting that the U.S. and China are closing in on a trade deal. NPR's David Greene talks to Erin Ennis, of the U.S.-China Business Council.

Negotiators Are In Beijing For Talks On Ending U.S.-China Trade War

April 29, 2019 • Demonstrators in Sudan continue protests in front of the military headquarters in Khartoum as opposition leaders meet with military rulers to discuss a handover to civilian power. 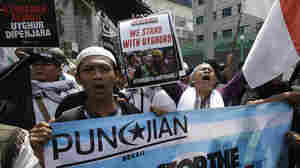 April 29, 2019 • The 20th annual report identifies 16 countries that engaged in or tolerated egregious violations. It also names five entities as violators of religious freedom, including ISIS and the Taliban.