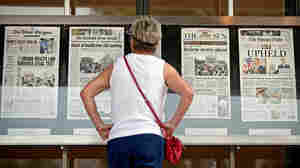 The Day After A Health Care Crescendo, Each Side Plays A Familiar Refrain

June 29, 2012 • Supporters of the Affordable Care Act are back to singing its praises and doling out money. Opponents are trying to focus on the one aspect of the case that they won, limiting government's ability to withhold Medicaid money from states.

The Day After A Health Care Crescendo, Each Side Plays A Familiar Refrain

June 29, 2012 • Tests that take hours instead of days can help doctors make a better diagnosis of infectious diseases. The results can help them decide which antibiotic to use, and which one to keep in reserve.

June 29, 2012 • Journalists raced to get copies of the Supreme Court decision on the federal health law out of the courthouse as fast as humanly possible. Photographers were there to document their colleagues' athletic prowess. 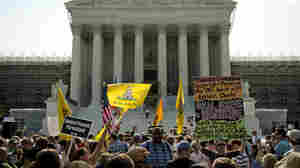 Protesters and supporters of President Obama's health care law await the Supreme Court's ruling Thursday. The court ruled to uphold the law. The focus now shifts to the states, which are responsible for the lion's share of getting people without insurance covered. Kevin Dietsch/UPI /Landov hide caption

June 29, 2012 • The decision shifts much of the burden of implementing the law to the states, which are responsible for the lion's share of getting people without insurance covered under the health law. States also now have to make a decision about expanding Medicaid coverage to their poorest people. 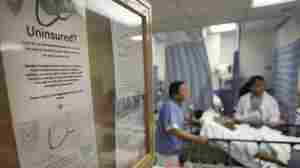 June 28, 2012 • Now that the Supreme Court has decided that the Affordable Care Act can stand, it's time to think about what the law actually means for your medical coverage. So let's review the changes the law has already wrought and those that still lie ahead. 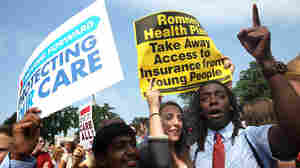 June 28, 2012 • Chief Justice John Roberts said the requirement that individuals have health coverage or pay a penalty falls within Congress' power to impose taxes. On the issue of Medicaid expansion, a majority of the court said Congress can expand Medicaid, but can't strip states of all their Medicaid funds if they fail to participate in that expansion. 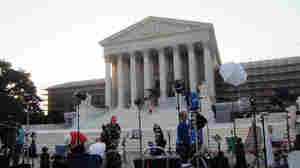 June 28, 2012 • Three months after historic arguments before the high court over the constitutionality of the administration's sweeping health care law, we are about to find out if it will hold up. 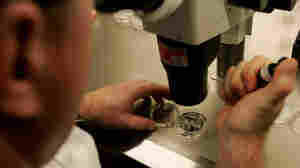 June 27, 2012 • A woman over 40 who uses eggs donated by a younger woman has essentially the same chance of having a baby as she would have had in her 20s. That's according to a large new study that looked at the success rates of multiple IVF treatments for nearly 250,000 women across age groups. 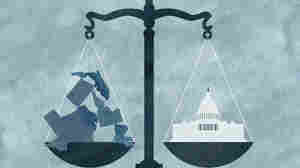 When the U.S. Supreme Court rules Thursday on the constitutionality of the Affordable Care Act, it will also rule on whether the expansion of Medicaid is an unconstitutional infringement of states' rights. Adam Cole/NPR hide caption

June 27, 2012 • Specifically, the court has been asked whether the part of the Affordable Care Act that would expand Medicaid to an estimated 17 million more people over the next 10 years is an unconstitutional infringement of states' rights. The court's decision on the health care law is expected Thursday.

What Clementines Can Teach Surgeons

June 27, 2012 • A piece of fruit can be a terrific stand-in for a patient during doctors' surgical training. And while there are high-tech simulators on the market, one researcher believes skills crucial to minimally invasive surgery might be better taught with something as simple as a clementine.

What Clementines Can Teach Surgeons

June 27, 2012 • The Food and Drug Administration gave the green light to Belviq, a twice-a-day pill that suppresses appetite and appears to affect metabolism by influencing levels of the brain chemical serotonin. The agency had previously rejected the drug over concerns about safety. 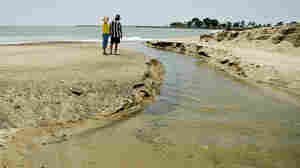 A Guide To The Cleanest And Filthiest U.S. Beaches

June 27, 2012 • An environmental group has issued its annual report on the nation's filthiest beaches, where a day in the water can mean skin rashes, stomach flu and respiratory problems. Who made the list? 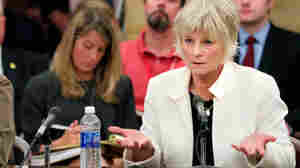 Deb Waldin testifies about her experience with a debt collector at a Minnesota hospital during a hearing led by Sen. Al Franken in St. Paul, Minn., in late May. Minnesota Public Radio/Jeffrey Thompson hide caption

June 27, 2012 • The Treasury Department has proposed restrictions on debt collectors, required under the 2010 federal health law, to protect patients at nonprofit hospitals. A Supreme Court ruling that strikes down the entire law would scotch the new rules.

June 26, 2012 • Consensual sex among aging residents of nursing homes can be fraught. And when those older people are showing signs of dementia, family members sometimes stand in in the way of love. 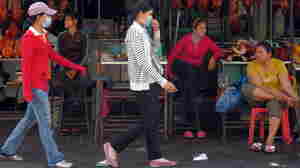 Swine Flu May Have Killed Far More People Than Thought

June 26, 2012 • The global death toll from the swine flu pandemic may have been 15 times larger than previous estimates. Researchers tried to fill in gaps in places around the world where statistics on the illness were harder to come by.