May 31, 2013 • The green light comes despite questions about whether the proton beam treatment is more effective than less expensive options. The two centers, about three miles apart, will compete for patients in the Washington area. 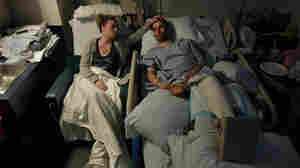 Jen Regan strokes the head of her fiancée, Marc Fucarile, as he sleeps in his hospital bed at Massachusetts General Hospital. Fucarile was injured in the bombings at the Boston Marathon, and had to have his right leg amputated. Bill Greene/Boston Globe via Getty Images hide caption

Survivor Of Boston Marathon Bombings Has Long Road Ahead

May 31, 2013 • Marc Fucarlie left the hospital this week, after 45 days of surgeries and skin grafts, induced comas and dozens of tests. His right leg was amputated and it's uncertain how functional his left leg will be. His rehabilitation will take years, and he's worried about how he'll pay for it.

Survivor Of Boston Marathon Bombings Has Long Road Ahead 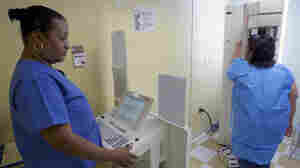 Toborcia Bedgood performs a mammogram to screen for breast cancer at the Elizabeth Center for Cancer Detection in Los Angeles in 2010. Damian Dovarganes/AP hide caption

May 31, 2013 • Mastectomies have become increasingly popular for women with breast cancer. That's a big turnaround from the 1980s, when women abandoned mastectomy in favor of breast-saving lumpectomy. 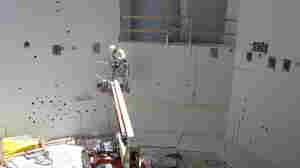 A construction worker paints walls at the Maryland Proton Treatment Center in Baltimore. Each of the center's five rooms will contain a massive piece of equipment that will rotate around a cancer patient to deliver a special kind of radiation. Jenny Gold/Kaiser Health News hide caption

May 31, 2013 • Local officials in Washington D.C., are on the verge of approving two high-tech radiation facilities for treating cancer at a total cost of $153 million. The treatment these hospitals would offer costs twice as much as standard radiation, but hasn't been shown to work any better for most cancers.

May 30, 2013 • In three-quarters of the states where the federal government is running the marketplaces, at least one new insurer has applied to enter the individual market. 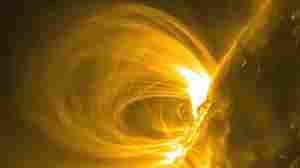 Headed To Mars? Watch Out For Cosmic Rays

May 30, 2013 • The dose of radiation an astronaut would experience on a trip to Mars is higher than the annual limit set for workers at nuclear power plants. But Mars enthusiasts say the radiation threat isn't high enough to cancel the trip.

Headed To Mars? Watch Out For Cosmic Rays 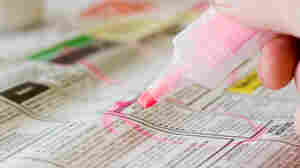 Unemployment can be a health hazard. unknown/iStockphoto.com hide caption

May 30, 2013 • Policymakers who've relied on health initiatives to address the mortality gap may take a look at the workplace. Family-friendly policies, like paid parental leave and subsidized child care, that could help keep women employed. 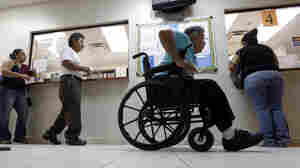 Immigrants Subsidize, Rather Than Drain, Medicare

May 30, 2013 • Immigrants contribute tens of billions of dollars a year more to Medicare than immigrant retirees use in medical services, an analysis finds. Restrictions on immigration could deplete Medicare's finances.

May 30, 2013 • People with ADHD in childhood are more likely to have problems with drugs and alcohol later. Studies have disagreed on whether treatment with stimulant drugs like Ritalin makes that abuse more likely, or protects against it. The biggest review yet says stimulant treatment neither helps nor hurts.

May 29, 2013 • Young adults insured under their parents' plans were shielded from the potentially catastrophic cost of a medical emergency, a review of hospital records found. Researchers say $147 million in hospital bills were charged to insurers rather than the patients in 2011. 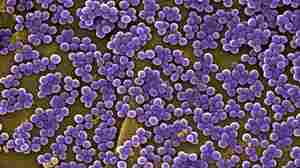 To fight antibiotic-resistant staph germs like these, a study suggests disinfecting the skin of all intensive care patients. Janice Carr/CDC hide caption

May 29, 2013 • Some states have started requiring hospitals to screen their patients for the drug-resistant bacteria known as MRSA. But a study that tested different approaches to reducing infections found that screening first wasn't the most effective approach. 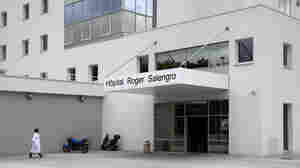 A nurse walks towards the Roger Salengro Hospital in Lille, France, where two patients were diagnosed with a coronavirus related to SARS. Michel Spingler/AP hide caption

May 29, 2013 • All told, the fatality rate for confirmed infections with the virus has been more than 50 percent. But the true fatality rate won't be clear until the fuller extent of cases, some probably much milder, becomes known. 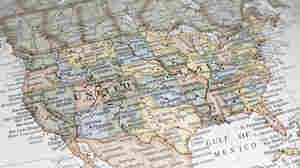 Where a person lives seems to have an effect on Medicare spending. But why? iStockphoto.com hide caption

May 29, 2013 • Waste and aggressive treatment might not explain Medicare cost variations after all. Differing levels of health by region could account for most of the cost variation, an analysis finds. 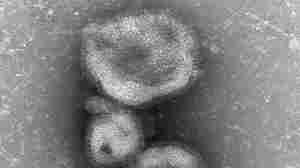 The H7N9 virus, as seen with an electron microscope. CDC hide caption

May 28, 2013 • Doctors in China concluded that early treatment of bird flu cases with Tamiflu could help patients even days after infection. But the doctors also found in two cases that the virus apparently became resistant to the antiviral drug. 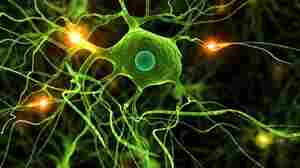 Genetic changes in signaling pathways in the brain may cause schizophrenia. iStockphoto.com hide caption

Each Family May Have Schizophrenia In Its Own Way

May 28, 2013 • Some families with a history of schizophrenia share genetic variants on one brain pathway, a study finds. And the family members with schizophrenia are more likely to share symptoms. This may help researchers decipher the frustratingly complex genetics of schizophrenia.